With the Lundbeck Decision, the European Commission (the “Decision” and the “Commission,” respectively) ended its ten-year investigation on reverse payment settlements and found that the Danish pharmaceutical company, Lundbeck, and four generics producers had concluded anticompetitive agreements, in breach of Article 101 of the Treaty on the Functioning of the European Union (the “TFEU”).[1]  According to the Commission, this would have allowed Lundbeck to keep the price of its drug citalopram artificially high and delay the entry of cheaper medicines into the EU market.[2]

On 8 September 2016, the EU General Court (the “General Court”) confirmed that certain pharmaceutical “reverse payment settlements” can constitute a breach of the EU antitrust rules (the “Ruling”).[3]  Under the so-called “reverse payment settlement agreements”, an original pharmaceutical manufacturer, or “originator”, settles an IP challenge from a manufacturer of generics by paying the latter to stay out of the market.

Lundbeck is “a global pharmaceutical company specializing in psychiatric and neurological disorders”.[4] These include medicinal products for treating depression.[5]  From the late 1970s, Lundbeck developed and patented an antidepressant medicinal product containing the active ingredient citalopram’.[6]

After its basic patent for the citalopram molecule had expired, Lundbeck only held a number of the so-called “process” patents, which, according to the Commission, provided only “a more limited protection”.[7]  In particular, Lundbeck had filed a salt crystallisation process patent.[8]

According to the Commission, in 2002, Lundbeck concluded six agreements concerning citalopram with four entities active in the production or sale of generic medicinal products, namely Merck KGaA / Generics (UK), Alpharma, Arrow, and Ranbaxy.  Always according to the Commission, in return for the generic undertakings’ commitment not to enter the citalopram market, Lundbeck paid them substantial amounts.[9]  In addition, Lundbeck purchased stocks of generic products for the sole purpose of destroying them, and offered guaranteed profits in a distribution agreement.[10]

After the Lundbeck case, in 2013 and 2014, the Commission imposed fines on companies in two other reverse settlement investigations – one concerning fentanyl, a pain-killer[16], and the other concerning perindopril, a cardiovascular medicine.[17]  The Fentanyl decision was not appealed.  Several appeals against the Servier decision are pending before the General Court.[18]  In 2016, in the Paroxetine Investigation, the UK Competition and Market Authority (“CMA”) issued infringement decisions to a number of companies regarding ”pay-for-delay” agreements over the supply of an antidepressant.[19] These agreements were found to be an infringement by object and effect. In March 2017, the CMA issued a statement of objections relating to an agreement aimed at delaying the entry into the market for the supply of Hydrocortisone tablets. The CMA has not yet issued its final decision.[20]

In addition, since 2009, the Commission has been continuously monitoring patent settlements in order to identify settlements which it regards as “potentially problematic” from an antitrust perspective, namely those that limit generic entry against a value transfer from an originator to a generic company.  The latest report was published in December 2016.[21]

First, like the Commission, the Court analysed whether Lundbeck and the generic manufacturers concerned were indeed potential competitors at the time the agreements at issue were concluded.[22]  The General Court made the following findings in this regard:

In order for an agreement to restrict potential competition, it must be established that, had an agreement not been concluded, the competitors would have had “real concrete possibilities” of entering that market.[23]  The Court held that the Commission had carried out a careful examination, as regards each of the generic undertakings concerned, of the real concrete possibilities they had of entering the market.  In doing so, the Commission relied on evidence such as the investments already made and the steps taken in order to obtain a marketing authorisation[24]

Moreover, the Court noted that in general, the generic undertakings had several real concrete possibilities of entering the market at the time the agreements at issue were concluded.[25]  Those possible routes included, inter alia, launching the generic product with the possibility of having to face infringement proceedings brought by Lundbeck (i.e., the so-called launching ‘at risk’).[26]  More precisely, the General Court was of the view that “the presumption of validity cannot be equated with a presumption of illegality of generic products validly placed on the market which the patent holder deems to be infringing the patent”.[27]  Consequently, the Court, continued, “’at risk’ entry is not unlawful in itself”.[28]

As rightly noted by commentators, these considerations introduce a further layer of complexity in the already intricate relationship between EU Competition law and IP law. In addition, since the right to exclude lies at the core of any IP right and (if there is no competing product) to have a monopoly is not illegal, unless it is attained or maintained by improper means,[29] it can be argued that the Commission’s findings infringes Article 345 TFEU, according to which “[t]he Treaties shall not prejudice the rules in the Member States governing the system of property ownership”.  Thus, Ibañez Colomo has noted that “Lundbeck departs from the principle whereby an agreement is not restrictive by object where it remains within the substantive scope of an intellectual property right”.[30]  This principle would derive from the Erauw-Jacquery,[31] Coditel II,[32] BAT v. Commission[33] and Nungesser[34] rulings of the ECJ.  Ibañez Colomo’s point becomes particularly clear at para. 335 of the (Lundbeck) Ruling where the General Court expressly noted that “even if the restrictions set out in the agreements at issue fall within the scope of the Lundbeck patents – that is to say that the agreements prevented only the market entry of generic citalopram deemed to potentially infringe those patents by the parties to the agreements and not that of every type of generic citalopram – they would nonetheless constitute restrictions on competition ‘by object’ since, inter alia, they prevented or rendered pointless any type of challenge to Lundbeck’s patents before the national courts, whereas, according to the Commission, that type of challenge is part of normal competition in relation to patents (recitals 603 to 605, 625, 641 and 674)”.[35]

Second, the Court analysed whether the Commission was entitled to conclude that the agreements at issue constituted a restriction of competition by object, a point to which we will turn next.

IV. Conclusions:  On Reverse Payments as Restrictions of Competition by Object

The Lundbeck ruling brings a number of what Donald Rumsfeld would probably refer to as “known unknowns”, that is things we know we do not know, in relation to reverse payment settlements.[36]  Indeed, the findings of the Lundbeck ruling can be summarised as follows (see also the table below):

Moreover, to the extent that the case for restrictions of competition by object is administrability, this author cannot but note that the Lundbeck ruling does not constitute a positive evolution.  The General Court noted that “it is established that certain collusive behaviour […] may be considered so likely to have negative effects, in particular on the price, quantity or quality of the goods and services, that it may be considered redundant, for the purposes of applying Article 101 TFEU to prove that they have actual effects on the market”.[51]  However, the Decision has 464 pages.  Given that the Fentanyl and Servier decisions occupy 147 and 813 pages, respectively, in investigations that lasted for almost ten years, 27 months and 5 years (again, respectively), one cannot but wonder whether the Commission’s resources would have been better spent analysing the actual effects of the agreement and not defending a legal category. 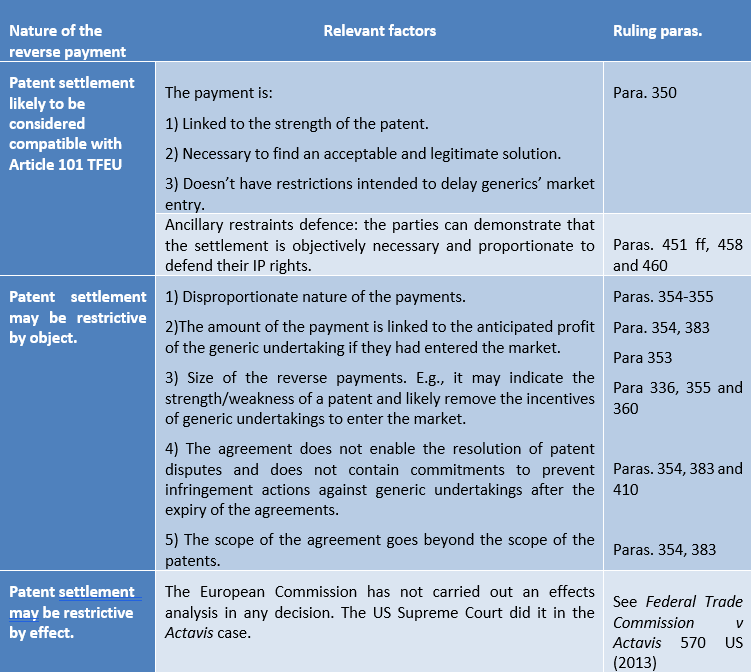 Pablo Figueroa is a senior associate in the Brussels office of Gibson, Dunn & Crutcher LLP with more than ten years of experience working in European and Spanish Competition law. A graduate from the University of Deusto (Bilbao, Spain), the College of Europe (Bruges, Belgium) and the Cornell Law School (Ithaca, New York), Pablo has particularly wide experience in EU and Spanish competition law and litigation. He has litigated before the EU Courts and the Spanish Courts. Pablo is a Visiting Lecturer on Competition law at Queen Mary University and the Universidad de Deusto, is an editor of World Competition, Law and Economics Journal (Kluwer) and is recommended by Chambers Globel for Belgium - Antitrust 2017 and Legal 500 EMEA 2015.

Mireia Prat is a Spanish qualified lawyer in the Brussels office of Gibson, Dunn & Crutcher LLP. Mireia holds a dual Degree in Law and Management and Business Administration from Pompeu Fabra University (Barcelona) and has spent a semester in Goethe Universität (Frankfurt) as an exchange student. Mireia focuses her practice on EU and Spanish Competition law, as well as on IP law. Prior to Gibson, Mireia had trained at an antitrust unit at the European Commission in Brussels and in the IP and litigation department of a Magic Circle firm.